The God’s shone on Te Anau

“I don’t know where that day came from, but I’ll take it” said Race Director Nathan Fa’avae after the 16th Spring Challenge women’s adventure race was held in Te Anau over the weekend.

424-teams lined up on the lakeshore in Te Anau for their respective events at the iconic event, the 3-hour, 6-hour or 9-hour challenges. Months before the event was sold out to a full capacity field at 450-teams but the effects of Covid, winter flus and high fuel prices, were the common themes in why some teams had to withdraw.

Event Director Jodie Fa’avae comments “it was a great number for the event all things considered, Te Anau is the furtherest south we have held the Spring Challenge, it’s a long way for most of our participants, and exiting Covid people are still trying to get back to some level of normal. We closed the field at 450-teams for Te Anau because much of the event was in National Park and we didn’t want it to be overloaded. For Waitaki 2023, the field size will return to the 480-limit”.

“I don’t know where that day came from, but I’ll take it” said Race Director Nathan Fa’avae

Leading into the race was idyllic settled weather and the forecast for the event day was picture perfect, everyone was praying it would hold true and it did.

“Every event we always hope for fine weather, it makes everything so much easier to manage and makes it more enjoyable, but you take what you get, that’s the outdoors. But for this course in Te Anau, I knew that if we ever wanted to strike the weather jackpot, I wanted it for this event. The region and course was so incredibly majestic, I knew that it would blow people away if they could see the views and experience quintessential Fiordland at it’s best” Nathan says. It was minus 5º as teams shivered in the dawn light awaiting the start.

Cold and clear is the best way to describe the event morning. The first teams gathered on the lake shore for the mountain bike stage to the control gates at the Waiau River. It was minus 5º as teams shivered in the dawn light awaiting the start, perhaps the saving grace at that time was everyone knew it was going to be an amazing day, and later on, it would be hot.

One measure to avoid mass groups in the National Park was instead of the normal three start waves teams were spread out over six waves, each hour from first light until midday.

The race started with a 4km mountain bike on the Lake-2-Lake trail to the control gates at the Waiau River. From there teams parked their bikes and board rafts for an 11km paddling stretch to Rainbow Reach, essentially rafting a pristine crystal clear waterway. The first rafts paddled into mist in cold temperatures but as the light increased, so did the temperature.

The first rafts paddled into mist in cold temperatures but as the light increased, so did the temperature. All teams and categories did the same two stages to begin with, the

Track to the control gates. The 9-hour teams had a two options, they could collect the checkpoints on theHart’s Hill route, or they could do a completely different hike through the Forest Burn, which was longer in distance but had significantly less climbing. Event staff had timed the 2-routes and believed Harts Hill was approximately 15-20 minutes faster, but other factors could reduce or extend that time, making both route options justifiable. In the 9-hour event, it was team Queen Bees (Claire Bell, Hannah Buchanan, Morgan Ahu) who were first to emerge from stage 3 after almost 4-hours of racing. They looked strong as they transitioned from hiking to mountain biking on stage 4, a 25km ride to Lake Manapouri. As they departed on the stage the 2nd place team arrived just 10-minutes back, team We-Sain Bolt (Kim Turney, Sommer O’Shea, Nina Jaine). On bikes We-Sain Bolt closed the gap to the leaders and the teams arrived at Lake Manapouri virtually together. Unfortunately for Queen Bees, their Support Crew was not there to meet them for the final stage and they were delayed starting the stage, an error for both the team and crew. This allowed We-Sain Bolt to pull away on the kayak stage, which started with a 9km paddle to Hope Arm which included a portage from Surprise Bay to George Bay. Teams on the 25km ride to Lake Manapouri.

Here the teams had another major route choice. They could drop their kayaks at Rawiri Bay which saved almost 3km of kayaking, but it meant teams had to navigate through 2-3km of untracked Fiordland forest to reach a main trail. If teams wished to be on trails for the next hiking stage, they had to kayak the extra 3km to Hope Arm hut. The route options rejoined at the Waiau River mouth, and teams had a short kayak stage to Pearl Harbour, then a final 1km run along the lake shore to reach the finish.

It was an incredibly exciting finish as both teams were on the final kayak stage together, with We- Sain Bolt leading the Queen Bees by just seconds. After eight and half hours of racing, it was We- Sain Bolt that crossed the finish line in first, just seconds in front of the Queen Bees. The third place team F F Firebirds (Jo Spender-Bower, Jackie Cohen, Naomi Whitehead) were very competitive and spent much of the race just behind the leading duo, finishing just 10-minutes back from the leaders. 9hr teams had a 9km paddle to Hope Arm which included a portage from Surprise Bay to George Bay.

The 6-hour event course was similar to the 9-hour but without the extra stage on Lake Manapouri. It was tight racing at the front of the field with the top three teams all finishing within 10-minutes of each other.

In the 3-hour event it was the school teams that set the pace setting both the fastest and second fastest time through the course. While the level of navigation for the 3 & 6-hour events is set at beginner and intermediate levels, there were many teams that lost time on a few of the checkpoints on both courses, allowing the stronger navigators to apply their craft. The teams enjoyed sunshine, scenery and celebration when they reached the finish line in Manapouri. The feedback from the course was glowing and it obvious watching teams crossing the line that they had enjoyed rewarding adventures.

Nathan concludes “Te Anau was Spring Challenge as good as it gets, that will set up the 2023 nicely, I’m equally excited to be going to Waitaki next year. The region is very different to Fiordland, but I know the course we have mapped out is world class, and Waitaki is thrilled to be the hosts for the 17th edition, it will be monumental”.

Jodie adds “We’re expecting a big year for Spring Challenge 2023, there are so many women stepping up to the challenge and wanting to be part of something exceptionally unique It’s humbling and inspiring for us, our event staff, and our event sponsors, to create these adventures that so many women are gaining so many things from, it can be a very powerful experience for so many women, that’s one of the aspects of the event that is hugely motivating for us”. Entires for the 2023 Waitaki Spring Challenge open on October 7th and 7:00pm.

We're not around right now. But you can send us an email and we'll get back to you, asap. 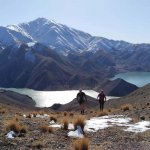